About 15 years ago I came up with 4 criteria to evaluate my current job and have since used them to evaluate jobs that I've applied for. They are:

I allocate a rating for each one on a scale of 1 to 10 and then add it up. Anything above 30 is a good score.

There are times when you'll sacrifice one of the points for more of another because it brings your overall score up. A case in point:

My wife recently changed jobs so that she now works from home (doing the same job) rather than work in a store. For that she took a pay cut. Although we didn't use these 4 points to explicitly evaluate her new job we would have probably reduced point 4 by 2 points. However, she loves working from home so point 2 has probably gone from a score of 2 to 10 for a net gain of 6 points.

Your job score might change from month to month so evaluate it and write it down and check it every now and then. 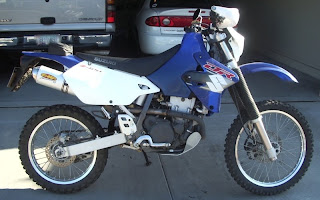 I have a new ride. It's a Suzuki DRZ-400. It's too tall for me to touch my feet flat on either side but when I become obese I'm hoping that I'll be able to weigh the shocks down enough to flat foot it.

It's great fun in the desert but a bit slow on the open road. I'm planning on a trip from Lake Pleasant up to Crown King via the forest back roads in the next few months. Let me know if you're interested in joining me.

I was just watching a movie (Stardust) which has a unicorn and a thought suddenly struck me, am I allergic to unicorns? I'm allergic to horses and unicorns look damn like horses so their genetic makeup might be similar so I could well be allergic to them. I know that this is going to bother me for a long time - or until I find the answer.
Posted by Guy Ellis at 8/10/2008 09:09:00 PM 2 comments:

Because of the cost of fuel, airlines are looking for ways to keep their prices the same and yet still make a profit. To do this they've started charging for trivial items that you don't need to consume on a flight like water, pillows, and blankets.

To reduce the cost of fuel that they burn, arguably the only but definitely the largest variable cost that the flight will bear they've started to reduce the weight of the plane by carrying less fuel and replacing the heavy metal food carts with plastic ones.

How else can airlines reduce the weight that they carry and therefore their costs?

One way to do this is to charge each passenger by weight (both body biomass and luggage) instead of by "piece." A person weighing 300 lbs is going to cost more to move across the country than a person weighing 150 lbs. Just ask the pilot of a Cessna.

At first blush this may seem unfair because you're taxing the fat. This is discrimination dammit!

Are we not already discriminating against the passengers whose combined body and luggage weight is below the average? Are they not paying an implicit subsidy for their heavier co-passengers? I think so.

If it costs the airline (say) $1 per pound in fuel to fly our biomass and luggage from Phoenix to New York and our total weight is 30,000 lbs then it's going to cost the airline $30,000 in fuel. If that 30,000 lbs is represented by 200 passengers weighing an average of 150 lbs each then the airline is going to have to charge each passenger at least $150 just to cover the fuel costs.

Now consider that 100 of those passengers each weigh 200 lbs and the other 100 each weigh 100 lbs. It's going to cost the airline $200 per heavy person and $100 per light person to move them across the country. The total cost to the airline remains unchanged at $30,000. However, the lighter passengers are paying $50 more and the heavier passengers $50 less for the costs that they contribute towards.

What would happen if an airline were to implement a fat tax policy?
What if they were to diplomatically call it an "underweight discount" instead of a fat tax?
Would that airline attract lighter people?
Would fat people boycott that airline? If they did, that would shift the fuel cost from this airline and onto other airlines. Good or bad?
Posted by Guy Ellis at 8/09/2008 07:25:00 AM No comments:

I have no idea how we got on to this subject but a co-worker described a Chuckwalla to me and when I heard the description I realized that I'd seen one on a hike at Pinnacle Peak on 4 August 2007.

I must confess that I didn't recall the exact date (or the year) but when I found the photo my ability to read the date off the image file didn't let me down.

This is apparently a large lizard (could you tell?) and part of the genus Sauromalus and the iguana family.