It was gusty today and with that comes tumbleweed. I'll be sitting staring out into the desert and see sometimes 3 or 4 tumbleweeds go tumbling past.

What surprises me is that when I go walking in the desert I never see them. I would have thought that when the wind isn't blowing they'd just be sitting there on the ground waiting for the wind to pick up. Unfortunately that's not the case. They appear to have gone into hiding.

When young and stupid I used to think that the words for Phil Colin's song "Can't Hurry Love" were "Cannons in Love." I could never figure out why a pair of fighting weapons would fall in love with each other. Now that I'm old and wise I see that it was less a problem with interpretation and more a problem of listening.
Posted by Guy Ellis at 2/20/2007 01:09:00 PM 11 comments:

On a dark desert highway, cool wind in my hair, warm smell of colitas rising up through the air.

I'm sure most of you got Hotel California by the Eagles which would be correct.

Well I has driving along a desert highway and as I thought appropriate I was playing that song and in magnificent tone deaf timing I was singing along to it. Now I wanted to know what colitas is.

A search of the web found me that answer on The Straight Dope. My favourite part of that explanation is the mangling of the second part of that line as: "Wurn Snell of Colitas rising up through the air."

This is attributed to Thomas Dzubin of Vancouver, BC with this interpretation of the meaning: "There was this fireworks factory just three blocks from the Hotel California and it blew up! Big tragedy. One of the workers was named Wurn Snell and he was from the town of Colitas in Greece. One of the workers who escaped the explosion talked to another guy. I think it was probably Don Henley and Don asked what the guy saw. The worker said, "Wurn Snell of Colitas, rising up through the air."

I had a good chuckle at that.

I recently watched The Pursuit of Happyness (yes spelt like that) with Will Smith and his son starring. Hot on the heels I see this article and map which maps out happy country in the world. Interestingly all the Scandinavian countries rank in the top 20 (including Iceland - I count that as part of Scandinavia but you might not). At the bottom of the list are some African countries.

It looks like money can buy happiness, except maybe in Britain, ranked at 41, or France, ranked at 62. I think that it's the burden of having to be the best lovers in the world that makes the French less happy than the English who are responsible for drinking the most in the world.
Posted by Guy Ellis at 2/16/2007 03:26:00 PM No comments:

I found this somewhat amusing. The image to the left shows part of a screen on a Microsoft site that I came across today. It appears that they have accidentally put the Sign Out button where they should have put the Sign In button.

Certainly has me confused because they not only have the image wrong but the functionality as well. In other words there is no way to sign into the site because only the sign out button is provided. I wonder how long that will take to fix.

I canceled my OnStar subscription today. After very little success with using it I called them up and listened to the whole cancellation spiel. First of all they try and get you to downgrade to a cheaper package. Then when you say no they drop the price of the cheaper package.

The one thing that really annoyed me was that she said: "You do realize that when you cancel this you will lose your unlimited roadside assistance..." etc. etc. etc. Recently we had a flat tire and we called OnStar and said "we have a flat and need assistance." Their answer: "Sorry, you don't have that package." Later when I questioned that they said: "Oh, we don't know what happened but you definitely have that cover."

The directions and connections are not much good. The software that they use must be fairly simple because they can rarely find buildings around you or it takes them forever to do so.

The only reason that I would have considered keeping OnStar would have been for their automated emergency calling. If your airbags deploy then the system automatically calls OnStar and if you can't speak they will call the emergency services and send them to you. So I thought that this would be useful if I was in a remote area and drove off the road and nobody could see the car. The catch here is that when I have tried to use OnStar in remote areas there is no reception anyway and so I was unable to raise them and so this wouldn't work. In areas where there is reception there are also plenty of other motorists to call 911 if you decided to take a short cut through a river.
Posted by Guy Ellis at 2/14/2007 08:24:00 AM No comments:

I got a book out of the library and discovered that its pages have a strong tobacco smell to them. Unless they have started to use burnt tobacco leaf to make book pages I suspect that a heavy smoker had the book out before me. 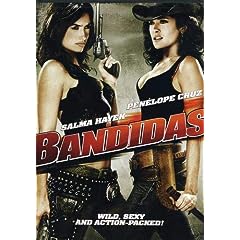 I was watching Bandidas with Salma Hayek and Penelope Cruz and I got to thinking... Is it possible that a movie with these two in it not be enjoyable to watch? Irrespective of the subject matter, plot, theme, characters I don't believe that this is possible. They are just too easy on the eye not to be able to make an enjoyable movie.

Now don't get me wrong. I'm not saying that it's going to be a good movie or a great move or even a movie where you remember anything that happens. It's just going to be a movie that you enjoy watching.

It is sub-titled "Wild, Sexy and Action-Packed!"

Before I learned how to speak Spanish, my friend Peter (who cannot speak Spanish) used to translate the name of this beer for me. He said that Dos means TWO (which it does) and that Equis means MULES (which it doesn't). He said that the beer was called this because it is so strong that it kicks like two mules.
For a long time I believed that because after a couple of them I'd wake up the next day feeling like I'd been kicked in the head by two mules.
I haven't had a Dos Equis for a while now but whenever I do I look at that label and I think "it kicks like two mules."
Posted by Guy Ellis at 2/09/2007 08:44:00 AM 2 comments: