Buffalo vs Lion vs Crocodile

Who will win? This is one of the most impressive YouTube videos that I have seen. An amateur takes a video at Kruger National Park. Lions attack Buffalo, Crocs join in and the fight begins...

It was time for detective husband to come to the rescue. I thought that I would share these tips with others who may one day need them.

I started the search in the laundry. It wasn't in the washer or dryer or down the back. I then went to the bedroom and checked that it hadn't ended up underneath the fitted sheet. All good so far but sometimes I've seen that pillowcase roll itself up in a tight ball and hide in a corner of the duvet cover. My wife assured me that the duvet cover was inside out when she started so it couldn't be in there.

Then I realized what had happened. The pillowcase had covered the pillowcase on pillow #1. Someone, no names mentioned, was chatting away on the phone and forgot to put down pillow #1 and pick up pillow #2 when moving on to pillowcase #2. 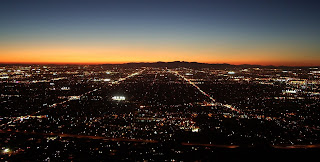 I'm fairly happy with how this photo turned out. It was taken on 10/19/2007 at 6:33pm (which is around half an hour after sunset) from the top of Piestewa Peak looking west.

I don't think that many people use all the facilities on their digital cameras. I have a ton of specialized settings on my camera under the PICT option as follows: Museum, Text, Food, Landscape/Portrait, Marine, Flower, Self-Portrait, Surf, Snow, Sunset. I have used them all, even the marine option, from a porthole in a submarine. 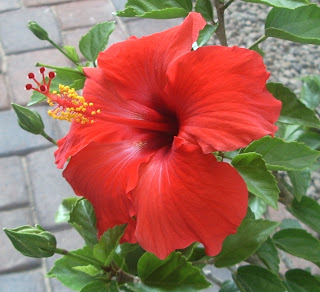 We've recently become the proud owners of our first pot plant; Hibiscus rosa-sinensis. It turned up on our doorstep one evening courtesy of our friends Justin and Liz.

We've also just had our side yard paved (background of photo) and so it was lucky that we already had a plant to adorn it with.

Over tea and toasted raisin bread we sat on our patio this morning and spent at least 45 minutes discussing Brilliant Hibiscus. Are we going to re-pot it? Or are we going to plant it? If we're going to re-pot it, must we do it ourselves or can we take it to a nursery and have them do it for us? What goes into the pot with the plant? Earth? Surely they've come up with something better than earth... If not, they're probably selling earth under a fancy name to make it more marketable.

The responsibilities of a new plant-parent are more than I was expecting. We have relatives arriving to stay in a couple of months. I think that I will hand over this decision making to them.

It took exactly 10 hours to complete. It would have taken me more like 12 hours to finish if I hadn't been walking with these 2 extremely fit girls who kept me moving a brisk pace. They also kept a close eye on my fluid intake and made me drink frequently which is probably the only reason that I did not end up dehydrated.

Amazingly I did not feel stiff the following day. In fact my previous 2.5 hour hikes over Camelback in Phoenix left me in far worse shape the following day than this 10 hour hike did. I think that it was because of all the electrolytes and Gu Gel shots that I was taking during and after the hike.

The hike started at 4:50am and we arrived at 14:40pm. It was described to me as 2 hikes; the first was the 7 hours to Cottonwood campground and the second was the 3 hours out on the canyon. The two to three hours is grueling. People mention that it's because you have already been going for so long and it's non-stop uphill out the canyon - which is true. There are two other factors that were never mentioned which I think play an equally important role in your struggle out the canon: The altitude, there's way less oxygen up there, and the fact that you've been up since 3:45am. Irrespective of what you've done during the day you're doing to be tired by that time in the afternoon if you got up at 3:45am.

I elected not to hike back this year but intend to do the hike in both directions next year. Valerie and Dede (my amazing hiking buddies) hiked back the next day and most of the rest of the 12 person team that hiked across hiked back the day after that.
Posted by Guy Ellis at 10/27/2007 01:44:00 PM 4 comments: 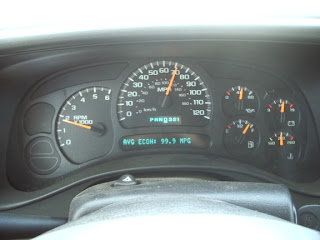 What do you do on a long journey to keep yourself occupied? Well here's an idea. Test the Average Economy part of your on board computer to see how well it works. Take a photo of it while driving at 70MPH.

I was bored. There was a long downhill coming up so I reset the Average Economy at the top of the downhill and coasted down. I'm driving a Tahoe which is not the best in fuel efficiency. Would you believe that Chevrolet do NOT expect their Tahoe to get better mileage than 99.9 MPG? That's where the calculation (or at least the display stops) so I was unable to determine exactly how fuel efficient I was being by driving downhill.

So how long do you think it will be before GMC realize this mistake and fix it on their cars? With hybrids becoming more and more popular they're going to have to address this. It's really a question of whether or not they know about this bug in their system.