Joan Jett and The Blackhearts 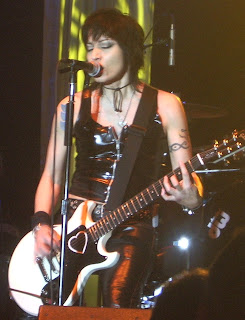 I remember rocking to Joan Jett and The Blackhearts' I Love Rock N' Roll in the early 80's as a teenager and never thought that I'd be doing it again 25 years later but this time just 10 yards from her playing live.
Our company hired Joan Jett and The Blackhearts as the feature band for the evening at our Xmas party. Before that we had 38 Special and (separately) Sinbad the comedian.
I'd never heard of Sinbad but was impressed with his impromptu and he had me laughing out loud a couple of times.
Joan Jett Rocks!
Posted by Guy Ellis at 12/14/2008 11:03:00 AM

Is the picture you used in the blog a file pic of Joan Jett or was it taken as the company bash? If the latter then she hasnt aged in 25 years.

That's a photo that I took last Saturday night - which I'm quite pleased with. I agree that for 50 she looks amazing.

The other thing that surprised me is that she has a fantastic smile but because she's a "hard rocker" you never see it in any of her videos or other photos.

You were close enough to get sweated on, how cool is that!