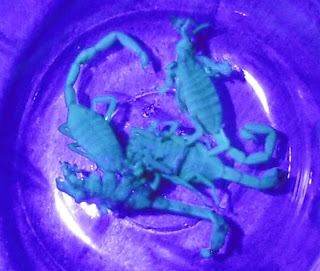 Not too long ago I bought a Black-Light ultra-violet flashlight very similar to this one. As soon as I had it I enthusiastically went around our community at nighttime looking for scorpions especially around all the houses that had reported having had them. I did this for about three nights in a row and was disappointed to find none and blamed the flashlight for not being powerful enough.

Fast forward to last night and a friend in the community tells me that he has also just got a black light flashlight and had recently found a whole bunch of scorpions. With renewed enthusiasm I went out with him last night and we managed to squash 7 of them.This is an image of 4 of the dead scorpions in a bowl being illuminated with the black light.
Posted by Guy Ellis at 11/08/2009 12:24:00 PM

Why are you killing them? I don't care much for bugs...but it seems a little extreme to go out of your way to kill them?

A number of our neighbors have been stung. One of them in her bed upstairs. We're trying to reduce the numbers to prevent us from getting stung.

Have you ever been stung by one? I haven't be I believe that it's like standing on broken glass and the pain can be with you for 24 hours.

If I saw one out in the desert then I would certainly not kill it because it's not threatening me. When it's about to come into my house and get into bed with me I'm not that happy about it.

hi there! I am a bit confused, (always) why would you get a special light to find skorpians? you should just look in the daytime, and spend the money you obvuíously wasted on a usless torch, on a pet mongoose, and it would be company for Colin.