"Hello."
"Who are you?"
"I'm the author."
"If you're the author then who am I?"
"You, are a fictional character that I created to help me write a bestseller."
"I'm skeptical, what's my name?"
"Your name is Sherry?"
"You're wrong. My name is Rebecca. Do I really look like a Sherry to you?"
The author paused, fingers dangling like cocktail sausages over the keyboard, he realized that he'd already lost control of the first character that he'd created.

Madam Toastmaster, fellow toastmasters and guests. What you just heard was the beginning of the very first version of a book I wrote called Wild Fiction. 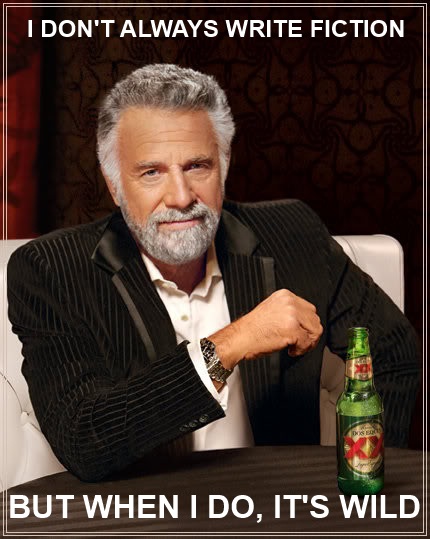 Who has written a book or would like to write a book one day?

My desire to write a novel gnawed at me from about the age of 8. I made a few feeble attempts in my early twenties but those novels never got further than a couple of pages. Then one day I enrolled in a writing course at a place called The City Lit in London's West End. It was an evening course, once a week over several weeks. One of the assignments we were given was on dialog and how to write it and the short story that I came up with turned into the first chapter of my one and only novel.

I loved the character that I'd created in that short story so much that in the next few weeks I wrote another three chapters to take the book to a total of four chapters. I was rapidly on my way to writing my first novel. This happened over a few weeks in 1996 and three year years later, in 1999, I was still only four chapters into the story. Writers block had settled in, or so I thought, and the story was frozen in time.

Let me tell you a little bit about writer's block. In his first self-help-book for writers titled How to Write a Damn Good Novel, James Frey describes writer's block and how to resolve it. In his second book How to Write a Damn Good Novel II he tells you that he made a mistake in the first book and there's no such thing as writer's block and you just need to stop feigning it and write. He gives the example of a bricklayer that wakes up one morning and tells his wife that he has bricklayer's block and won't be able to go to work that day. His wife would kick him out of the house and send him to work without a second thought with a lame excuse like that.

I have to agree with his advice in his second book. If you feel uninspired or uncreative then there are a number of exercises that you can do to get the creative juices flowing again. So long as you're writing something, doesn't matter if it's your novel, it will eventually lead you back there.

At the beginning of 1999 I set off traveling around the world. One of my objectives was to complete the novel I'd started and in that time I certainly made some headway but not as much as I thought I would. I got another 20 to 30 chapters further into the story and shared it with people that I was traveling with and got some great feedback. What I hadn't counted on was the fact that when I landed in each of these exotic destinations it was my duty and obligation to myself to go out and seek adventure and explore my new habitat and not spend my days sitting in the hostel writing. What's the point in being in the middle of the Amazon if you're not going to see the Amazon?

After three years of traveling I still hadn't finished writing. I was getting to a point where I was running out of money and needed to return to London and find a job. I knew that there was no way that I'd ever finish the novel if I went back to work so I made myself a promise that all I was going to do was write until the book was done and then return to work. I went off and stayed with a friend who had nothing of interest near to where he lived and he was never at home and for four months I wrote until the novel was finished and then I started the process of revising it until I'd revised it four times and was sick of the story.

Revising the story is rereading a story you just read and when you have to do it four times you are sick of it at the end.

I tried to get the book published. I bought a big thick book which listed the literary agents and wrote to one hundred of them. Twenty five of them replied saying that they weren't interested but five replied asking for a sample. I picked one and sent them a sample. One of the tricky things with literary agents is that you can only submit your sample chapters to one at a time. I waited three months for them to reject my sample and by then I was working eighty hour weeks and didn't have the time or inclination to submit to another publisher.

It lay in a bottom drawer for a couple of years and then I found time to publish the book on the web and make it freely available to anybody who wants to read it. If you are interested in a finding out what happens to the author and Rebecca you are welcome to read the novel at wildfiction.com. I’ve printed out some sheets with links to the books that I referenced.
Posted by Guy Ellis at 7/16/2013 08:07:00 PM