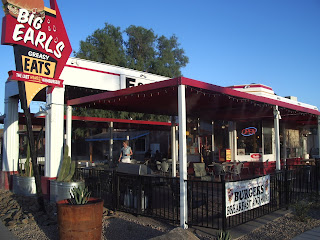 I'd seen Big Earl's Greasy Eats on the news a few months back. It made the headlines because Donald Sutherland was there shooting a new movie called Jolene which is due in October 2007.

The movie is based on a short story by EL Doctorow and follows the journey of a young woman as she travels across the country for ten years. Apart from Donald Sutherland the case will also contain Jessica Chastain, Rupert Friend, Theresa Russell, and Shannon Whirry.

Enough about the movie, it's not even out yet. Some friends were in town and we'd just been evicted from our local mall because our friends had their Chihuahua with them and our mall security weren't having any Chihuahua in their mall.

On seeing Greasy in the name of the restaurant I guessed that they weren't going to be as fussy and they allowed Timone (the Chihuahua) to run riot and knock over blades of grass and terrorize a colony of ants.

If you're ever in the town of Carefree, AZ, I highly recommend you try the Big Kahuna Chicken burger and the sweet potato fries with a vanilla malt shake. I do not believe that combination can be improved on. My wife thinks that the sauce they put on that burger was the best she's ever tasted (I would certainly put it in the top five) and I completely agree with her that the vanilla malt shake was the best that I have ever had.