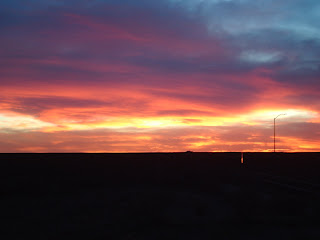 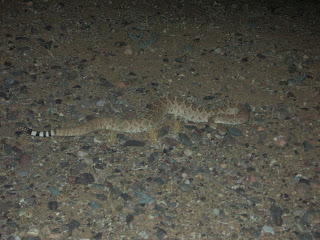 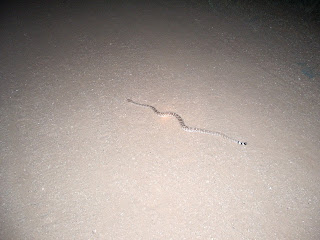 On Monday evening 4 June 2007 my wife and I took an evening stroll through the desert. I call this "The Last Con" because she swears that she isn't going to be conned into another night desert walk with me again. She's had enough of rattlesnakes.
Let's take the photos in order.
It takes us about 20 minutes walking along the side of the canal (Central Arizona Project Canal) until we're into the desert in a part of Reach 11 called the Arizona Horse Lovers Area. As we enter the desert the sun is setting. You may have been able to work this out from the first photo.
We we're in there for about 10 minutes when we encountered rattlesnake #1. When a rattlesnake shakes its tail it doesn't actually make the sound of a rattle it's more like the sound of an angry cat hissing. I immediately swung the flashlight to the hissing sound and then back to where my wife should have been standing. I swear that Carl Lewis couldn't have covered that distance in the time that she had. I coaxed her back to hold the flashlight while I took some pictures. You can see how well camouflaged it is even with light. Of course, in the dark it's invisible.
Another 20 minutes further on we came across the second rattler. This one was far more relaxed and wasn't interested in shaking its booty at us. However, it was heading straight towards us and didn't appear interested in changing course so we had to take a slight detour to get past it without encounter.
I've no idea how I'm going to convince her to come on another night hike with me. Any ideas?
Posted by Guy Ellis at 6/10/2007 11:24:00 AM