Stars and Stripes on Piestewa 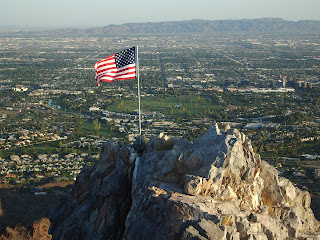 I went for my evening stroll up Piestewa today and when I got to the top I noticed that someone had put the star spangled banner on the least accessible peak of the 3 peaks at the top. I'm not sure why it's here. Does anybody know? I thought at first that it might be for the anniversary of Lori Piestewa's death but that's on 23rd March. It might be in preparation for 4th July but it seems a bit early...

I have tried to make it a rule to take my camera with me whenever I go hiking now because it seems that there's always something different or new on each hike - even the repeated ones - such as today.

The temperature at the bottom was 107 at the end of the hike - I forgot to check what it was at the beginning.
I'm particularly proud of this next photo of the flag that I took. I had to climb across to the bottom of the third peak to get the shot. Can you see the moon in the background doing a little bit of waxing? Do you know how you can tell if the moon's waxing or waning? If you're in the northern hemisphere and you can cup the moon with your right hand then it's waxing. (If you can't see the moon in the picture then click the picture and it should open the full sized version of the photo.) 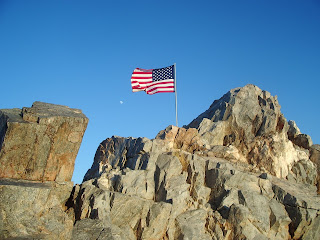