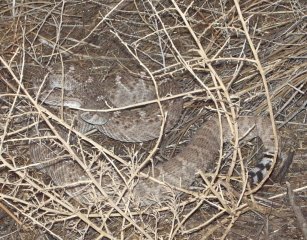 We saw our first rattler last night. A friend of mine was visiting from out-of-state and wanted to go for a walk in the desert and so we joked that the only animal we hadn't seen since arriving in Arizona 8 months ago was a rattle snake and that we were bound to see one that evening - and so we did.

Neither my friend nor I heard the rattler. We heard my wife scream and saw her run. It was amazingly well camouflaged as you can see in this photo. Not happy with being disturbed it had its head up in strike position but we kept our distance.

Here's a trivia question for you. What type of person is most often bitten by rattlers in Arizona? The answer: 95% of rattlesnake bite victims are drunk men. I presume that they were playing with them. I am tempted to add some of my own adjectives to help describe what else these men were/are but I will restrain myself.

My wife's bravery amazed me. Our first encounter with a deadly animal was a couple of weeks after we arrived here and discovered a tarantula crossing a quiet road which bordered the desert. I got out of the car and took a photo of it. She wound the windows up and locked the doors (with me outside) so that it couldn't get to her. She had obviously heard about how good tarantulas were at opening car doors and hence the need to lock them from the inside. I'm not sure if their dexterity extends to house doors as well? Perhaps if I find myself locked out in the garden one day this could be why.

After the initial scream and run my wife returned to the spot were the rattler was and using my friend and I as a buffer zone she watched in interest as we snapped it. Given her tarantula performance I thought that that would have been the last that we would have seen of her until we got home later. If anybody can identify what type of rattler (diamondback, lesser breasted sulfer crested etc.) please let me know by posting a comment to this.

We didn't see any more rattlers on the walk but there were three very skittish hikers that jumped when a cotton tailed bunny (dangerous vicious creatures) or bird zoomed by.
Posted by Guy Ellis at 6/21/2006 11:27:00 AM

That, my friend, looks like none other than a Western Diamondback rattler...but I could be wrong

Would I be correct in guessing this was in that chunk of land between the canal and the 101?

I've never seen a rattler there but I've heard coyotes baying at the moon a couple of miles to the east (other side of the canal near Bell and 60th street).

That's exactly where it was. It's called Reach 11 and the part that we were in is called the Arizona Horse Lovers Area.

Thanks for the snake ID Chris!