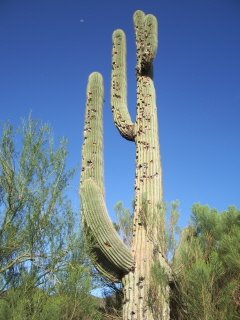 Before we talk about why the coyote was shocked (this has nothing to do which why the chicken crossed the road etc.) let's take a look at this saguaro cactus. Do you notice anything unusual or wrong with it. The trained eye will notice a number holes or pock marks in this cactus. These holes are made from an Arizonan insect called the GB which is about the shape and size of a ping pong ball but is much harder and heavier and flies at an amazing speed and pegs itself into the cactus where it lives for the rest of its life.

Sometimes, the GB insect does not fly that fast and bounces off the saguaro and at other times it almost pegs inside but remains clinging to the outside to eventually fall off one day. You may be able to see one precariously holding on to the left arm of the Saguaro - the one closest to the moon. I have blown it up for you here.

The GB insect is typically launched by a driver on the tee. This hole is the number 1 handicap (stroke index 1) hole on the Rancho Manana Golf Course in Cave Creek. The following video clip shows a coyote on the fairway relaxing next to the saguaro cactus. Without warning a GB insect leaves the tee and pings off the cactus scaring the hell out of the coyote which heads off to look for safer places to hunt.

As for my golfing partner. He obviously didn't think that the handicap 1 hole was difficult enough and was going via the desert, a coyote and a cactus to get to the hole.

Lots of people are having problems seeing the video in this blog. Don't know why this is. It's hosted on Yahoo Video instead of YouTube because when I uploaded it to 3 different video sites (YouTube, Google, Yahoo) the quality seemed to be the best on Yahoo and that's why I linked it from there. You can search in on Google Videos and YouTube as well but the quality isn't as good. If anybody has any ideas why this isn't working then please comment.