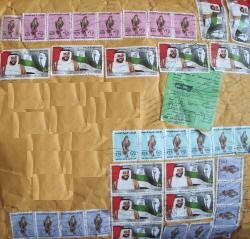 Today I received a package from Arabia. On inspection of the surface I estimate that about 70% of the front of the package is covered with stamps. (The clear area had my address before I blotted it out.) There are 4 different denominations of stamps and that number could have easily been reduced using a logical collection of the larger denominations - but hey - who wants to be logical when you can almost completely cover a package with many different bright colors? With stamps that bright and so many of them you don't even need wrapping paper on the presents inside - the stamps have done that for you.

A few years ago I was in Guatemala and bought a hammock which I wanted to mail to my dad. I packaged it up carefully in a shoebox and wrapped, sealed and addressed it and took it to the post office in the ancient capital on Antigua. (Antigua is no longer the capital - Guatemala City is.) The package was going to cost the equivalent of $25 to send (the hammock cost $3) and the clerk informed me that they had run out of large denomination stamps and could only sell me stamps that had the equivalent value of 5 cents.

I asked if she could frank the package but she said no and that I had to buy the 500 stamps and stick them on the package. There must have been about 50 stamps per sheet because I recall her pulling out about 10 sheets of stamps, each slightly smaller than an A4 sheet of paper. My mind having excellent 3-dimensional and spacial foresight ability was pondering how I was going to stick 10 x A4 sheets onto a shoe box so that all surfaces were showing. By the time that the transaction was finished and I had my stamps and $25 less in my wallet I had still not solved the problem and asked the clerk for her advice.

This was obviously not the first time that she had done this because without hesitating she showed me how to tear off row by row from each sheet and overlap them so that just the value of the stamp was showing from underneath the last row. Ingenious!

I spent the next hour or so on a hard wooden bench with a water roller, my shoe box and 10 sheets of stamps. Every 10 minutes I ferried the water roller back to the counter to get a water refill.
"Bottle or tap water?" She would ask.
"Tap water is fine," I replied with more and more surprise each time she asked me.

The package looked like a well wrapped Christmas tree by the time I handed it over. I hoped that she wouldn't weight it again because I'm sure that it was now at least 20% heavier with the stamps and water used to stick them there.

The package was destined for South Africa which has a notoriously bad record for delivery of anything by mail and I believe that Guatemala attempts to compete with that record. As such I had zero expectation that the package would arrive.

It did arrive. I know that because I have subsequently lounged in that hammock on a back patio in South Africa. Shame on me for my lack of faith in the international Guatemala - South Africa package route.
Posted by Guy Ellis at 8/16/2006 10:19:00 AM

That story is hilarious Guy! I can just picture it when your Dad got the package..... He probably thought it was bloody christmas tree!!

Surely your travelling memoirs are under consideration?

I suppose one day if I sat down with all the material I could put together some memoirs.

However, as you know, I've written a book before and I know what is involved. It is a mammoth task and I feel that by the time that I have finished the memoirs I would be so sick of them that they would no longer interest me. That's what happened with the book that I wrote.

So I'm thinking that if I relate a story or two here in my blog as it becomes appropriate then my memoirs will all end up here in the blog - and I'll be able to interact with people's comments along the way.

That sounds fair enough...... I know exactly where your coming from with the book thing man. My passion is under intense cross fire at the moment.
Gotta push through though I spose, as almost finishing a book seems a real waste... even if it doesn't hit the mark with the readers.

Whatever you do, finish the book now. Coming back to it later is very difficult and there's a good chance that you won't come back to it. Good luck.

By the way, does it have a title yet that you can tell us? What about the synopsis? Can you tell us anything about it?

Tah for the advice Guy, I'll stick at it.

By the way I've started reading "WildFiction" I'm up to chapter 6.

Sometime in the next few weeks I'll post something on my blog about my 'story'. If it gets published, then I'll call it a book. Theres no title yet though.