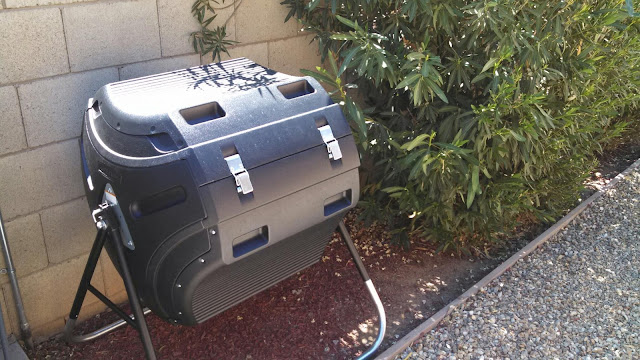 On 14 June 2013 we received this composter from Costco online. We assembled it in about four tough hours. Probably the most difficult assembly I've ever had to do. The are so many improvements that Lifetime could make to the process and the way that it per-assembles this product.

It's already about a third full in as little as a week due to the lawn grass going in there. Hopefully it'll provide some good mulch for the orchard when it's ready.

The cool thing about this composter is the tumbling action. You don't have to use a fork to turn the compost but instead pull out the lock pin on the left hand side and then spin the barrel using those big fat handles. The latches at the front release the top  one-third of the barrel which  is the lid.

You can also get this from Amazon: Lifetime Compost Tumbler. If you mentally prepare for the four hour tool-intensive assembly required before arrival it will be okay.

Another thing we did this last week was to stop by our local Starbucks and ask them for their used coffee grounds to add to the composter. It turns out that they don't keep them unless you specifically call ahead and ask them to. Be prepared for a couple of cups that were accidentally put in with the coffee grounds so fish those out when you see them in the tumbler. Also, all the filters will go in as well but that doesn't matter as those will decompose. It certainly gives the compost a great scent.
Posted by Guy Ellis at 6/20/2013 09:15:00 PM