We planted our two pistachio trees on 1/June/2013. These are the only trees that we've planted in our orchard that require both a male and a female tree to pollinate. The top images is the female pistachio and the bottom image is the male pistachio.


Our female pistachio is a Kerman. It has above average nut size. Shells split well, are easily opened by hand. Kernel size above average, of high quality, readily shaken or knocked from tree when ripe. Tree vigorous, upright-spreading. Blooms late, produces heavily but biennially. By far the leading commercial cultivar in the United States. It originates from Chico, California from seeds imported from Iran. 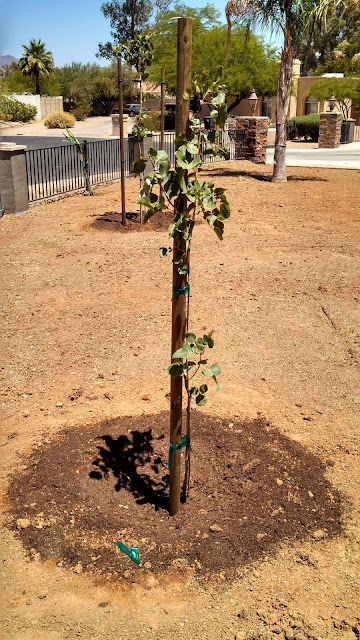 
Our male pistachio is Peters. It's a good producer of pollen. Its blossoming coincides with early blossoming cultivars, as well as the later blooming Kerman. Has a tendency to be a loppy, weak grower, especially when propagated on P. vera roots. Originated in Fresno, California by A. B. Peters.

Adaptation: Pistachios thrive in areas which have winters cool enough to break bud dormancy and hot, long summers. They are drought resistant and very tolerant of high summer temperatures, but cannot tolerate excessive dampness and high humidity. The tree has about the same cold resistance as almonds and olives but flowers later in spring than almonds. Chill requirements are estimated at 600 to 1,500 hours.
Posted by Guy Ellis at 6/07/2013 11:24:00 AM