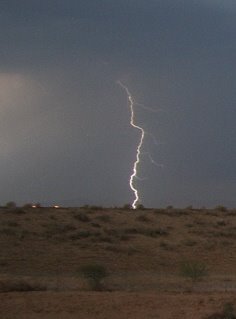 We have yet to experience a Monsoon in Arizona. I thought that we had experienced the edge of one 2-days-ago (Friday 30 June 2006) but the weather man (easiest job in the world) on telly later assured us that it wasn't.

I was so excited about the approaching lightening strikes and howling wind that I went outside and faced the elements and with my camera managed to use one of its features to catch this lightening strike over Desert Ridge Mall.

The trick to catching a photo like that is to leave the lens open for a few seconds. That means switching the dial to the twilight setting which is the picture of the man with a crescent moon next to his head. The next trick is to holding the camera steady. In fact, holding is not the right word because if it's in your hand it's not going to be steady, even if there's no wind blowing. So you have to set it down on a ledge and hold on tight to it so it doesn't blow off. Then press the tit and wait for about 5 to 10 seconds until the operation is over. During that period you have to hope that there's a lightening strike. Keep on trying until you get one.

Wait until you experience a Monsoon...I was in Tucson for the earliest monsoon recorded in AZ at the time. Dry creek beds fill up in a flash of lightening and roads are practically washed out. Truly amazing turn of events from the usual dry desert.

I've heard about these flash floods and areas getting closed off. I believe that weekend warriors driving Hummers regularly ignore the warnings believing that their autos can walk on water and the most washed away car here is a Hummer.