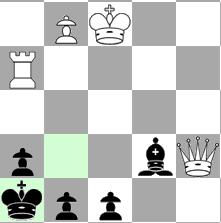 This is what part of the chess board looks like in an online game of chess that today has been going on for 476 days.

Our game suffers from some unusual obstacles. How often does you opponent, for example, get banned from the computer because he hasn't eaten all his supper or done all his homework? I'm not sure exactly what Mike gets up to but as you would expect with any youngster he needs to be disciplined every now and then which includes restricted computer access. Apparently I, as chess opponent, do not get any say in this.

I am black. Mike is white. I'm in a bit of a predicament. When we started this game I was about 8 times older than my opponent and was certain of victory. As the game draws to a close that multiple has diminished and I am now only 6 times older than him and far less certain about my position. I am about to be beaten. Perhaps it's time to encourage his parents to excercise more discipline and computer restrictions.
Posted by Guy Ellis at 7/09/2006 08:07:00 AM