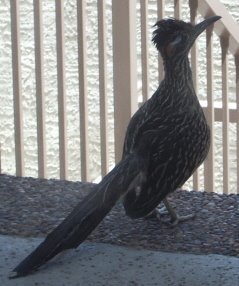 I was only an hour back from dropping Sanjay at the Pet Resort (the word "kennel" will not be seen in any self-respecting dog hotel that wants to stay in business) when a roadrunner appeared outside my window. It flew in to my 3rd floor balcony with a squawk and proceeded to strut about and pose for the photos that I was taking. I didn't even know that they could fly. In fact I wasn't sure that it was a roadrunner because it had arrived by wing - presumably from Reach 11 which is an animal preserve about 50 yards away.

So I turned to trusty wikipedia which assured me that they do fly but annoyingly it informed me that genus Geococcyx (of the cuckoo family) also came in both the Greater and Lesser flavor and I'll be damned if I can work out which is which. According to the geographically locations of where each can be found, this one should be a greater but it didn't look that great to me so I'm not sure if it hadn't come from the south to visit its northern cousins. 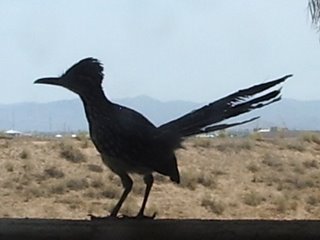 Having watched the cartoon Wile E. Coyote and Road Runner as a kid and having never heard of or seen a real road runner, I assumed as an adult that the road runner was a made-up bird that only existed in cartoons. About 6 months ago I was hiking the Cholla Trail on Camelback Mountain when some other hikers near me said "there goes a roadrunner" and there this bird went running past. I was amazed that they really existed but am now better educated. I have subsequently hit one with a golf ball (accidentally and gently - the ball had finished most of its travel) on a bird infested golf course. Long live this zygodactyl footed bird!
Posted by Guy Ellis at 7/24/2006 02:12:00 PM

Outstanding, you got a Birdie on that hole.